I WANT MY COURSE NOW!

What are they saying about us?

"And I want to thank you. It was never the same again. I never touched or kissed him the same way again. We are loving each other very much and I am very happy. "

"You are very clear and objective"

"We learn techniques of meditation and breathing, in addition to massages, we learn about anatomy and especially we learn that our consciousness is not limited as we insist on believing it to be, and that we can expand it. It was an incredible sensory experience and I recommend it to all who seek to improve their lives, their human relationships and, above all, their relationship with themselves. "

"Darling, a lot of gratitude indeed. This supervision was beautiful and very enlightening. You're cute "

"It was just wonderful ... Fantastic! It gave us a feeling of love, of fullness, of well-being never before experienced !! "

"I am loving ... much gratitude even for this access So many things that are instinctive and we do not practice ..."

"I am sure that from that day on, many of your beliefs about the body or about our misrepresented sexuality will disappear, and a new Being will begin in their lives."

"But what made me great was the fact that I reached ecstasy in just 15 minutes of meditation."

"Good Morning! My wife and I are watching the second video and we just have to thank you. We did not imagine how smell and taste could provide such pleasure. horniness, fullness, peace and happiness. For the first time I had dry orgasms. We had many spasms and contractions all over the body. It was a transcendental experience. We will never be the same again. Gratitude, Gratitude. Namaste!"

I WANT MY COURSE NOW!

Video-lessons, detailed, with all levels of tantric massage used by the best tantric therapists in the country. With lifetime access and access to all upcoming course updates

Sequencing techniques that, when put together, develop and potentiate the couple's orgasmic process in an extraordinary way.

ALL LEVELS OF MASSAGE

Eight video-guided classes for training all techniques and massages in detail.

Tantric techniques for the development and enhancement of the bodily senses

You have exclusive bonus too :)

I WANT MY COURSE NOW!

1. Is it worth choosing the online course rather than the classroom?

The online course has a video material, very well detailed and complete, with access for life, and can be accessed whenever you want. In addition, the online course gives the couple the opportunity to learn the techniques without exposing their nudity or their intimacy to a therapist or other participants, as usually happens in the face-to-face course. The student can also answer your questions within 3 months using our 1-hour consultation, which can be divided into up to 4 15-minute meetings.

2. But what if after I buy, I think the course is not good for me? Can I return it?

Yes. We have an unconditional guarantee system. If you feel that the course is not for you, we give you a period of 15 days to send us a refund request, no fine print. That simple.

3. My partner does not want to take the course. And now?

The course is formulated so that you can learn techniques that you can apply even without your partner or partner taking the course. Only these techniques, which include two techniques of tantric massage, penile and clitoral extrusion and techniques of capturing pheromones, already produce great advances in the sexuality of the couple. The course will ALWAYS BE AVAILABLE. So you will have time to gradually introduce and bring your partner to the knowledge available to him / her.

4. I'm not in a relationship. Is this course for me?

The course is designed for people who want to deepen and expand their love experiences. It is possible to learn the techniques to be used in future relationships or in beginnings of relationship. So if you intend to get in touch with someone soon, the course will work for you.

5. How will I get my doubts and know if I'm doing the exercises correctly?

As the course is all video, we provide detailed explanatory videos of the techniques using, in most cases, real, flesh and blood models. In addition, we have a contact channel specifically used to assist and answer questions. During, the course, if necessary we give complementary classes to remedy any difficulties or doubts.

6. Is it common during this meditative process to experience memories of the past and end up having emotional reactions like crying and everything else?

Yes, the exercises and techniques we use also act in a therapeutic way, healing traumas and dysfunctions. It is normal that there are reactions different from the ones we are accustomed to during ordinary sex. We advise you to freely express what you feel and to welcome any process that arises in the partner or partner.

7. I found the course very interesting, but my priority is strengthening the vaginal muscles. I know almost nothing about it, I have read some material only. Do you think this course meets my need?

This course offers as a bonus a course of tantric pompomism with crystal gems. In it are offered exercises of pompoarismo that help in the strengthening of the vaginal musculatura and in the potentialization of the feminine orgasms. The female tantric massage also favors the development of the pelvic region muscles and favors greater awareness and awareness of female sexuality.

8. We are a homoaffective couple. Does the course also fit for us?

Yes. The course is for anyone who has an interest in learning techniques of deepening love relationships. of any kind.

9. Would you like to become a tantric therapist, just like you, does this course help you in this matter?

The good thing about this course is that you have access to massage both in man and woman, and the 4 levels of massage, ideal for anyone who wants to work with appointments and still earn many bonuses for in-depth study. A true formation, for those who wish to study further on the subject.

The course has life access. You will be able to watch while our platform exists and you will enjoy all the updates and improvements that we will make in the future. 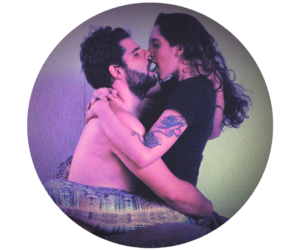 Gabriela Ostronoff (Raga) is a Tantric and Rebirth therapist formed by the Center for Metamorphosis in 2014, Yoga Teacher formed by the Center of Vedanta Sivananda Yoga in 2013 and by the Rose Method in 2001. Instructor in Meditation of Upanisha Ananda Mandir (Atmanambi, India) in 2015, Doula was formed by the Cais do Parto Institute in 2016. He studied Visual Arts at the University Center of Fine Arts of São Paulo. Since 2016, she uses special techniques of pompoarism, yoga and breathing to promote a better quality of life for her students and achieve altered states of consciousness. He has participated in several workshops on Bioenergetics, Body Expression and Meditation around the world.

Julio Marques (Ganga) is a Tantric and Rebirth therapist trained by the Metamorphosis Center in 2013. He holds a degree in Mechanical Engineering from the Federal University of Minas Gerais in 2012. He taught various groups in Meditation by Upanishan Ananda Mandir (Atmanambi, India) of Tantra as the Way of Love, Delerium for couples and individual courses and Tantric Massage group courses. He is a specialist in active meditation and human sexuality at the Metamorphosis Center. They are married, have two children and since 2014 have given courses on sexuality for couples and single people and participate in tantric therapies and respiratory therapies integrated in Tantra Yoga LAB, spatial retreats and therapeutic groups founded by them in 2015.

They are married, have two children and since 2014 have taught sexuality courses for couples and single people and work with Tantric Therapies and respiratory therapies integrated into Tantra Yoga LAB, special retreats and therapeutic groups founded by them in 2015.